Just one day before a bipartisan group of U.S. Senators sent a letter to Acting Interior Secretary David Bernhardt requesting that the department reconsider and scrap a proposed rule that would limit public records requests, Western Values Project (WVP) received a notice from Interior that a Freedom of Information Act (FOIA) request would be delayed to allow a political appointee to review the response.

The email, which has been redacted by WVP to protect personal information, indicates that WVP’s request has been completed but was ‘forwarded to our Solicitor’s Office for next level review.’ This is the first indication known to WVP that Interior has created a new political review process for all of the department’s public records since Interior’s leadership installed political appointee and former Koch-employee Daniel Jorjani to oversee the department’s FOIA program in November 2018.

“This new next level review reeks of political shenanigans to thwart transparency in the release of public documents in order to protect political appointees who have been doing the bidding of special interests,” said Jayson O’Neill, Deputy Director of Western Values Project. “We may have just solved the problem that this proposed rule to restrict public records was in search of and why there is such a backlog: a bottleneck review by a political appointee. We suggest eliminating this unnecessary bureaucratic policial review and letting the sun shine on public land decisions.” 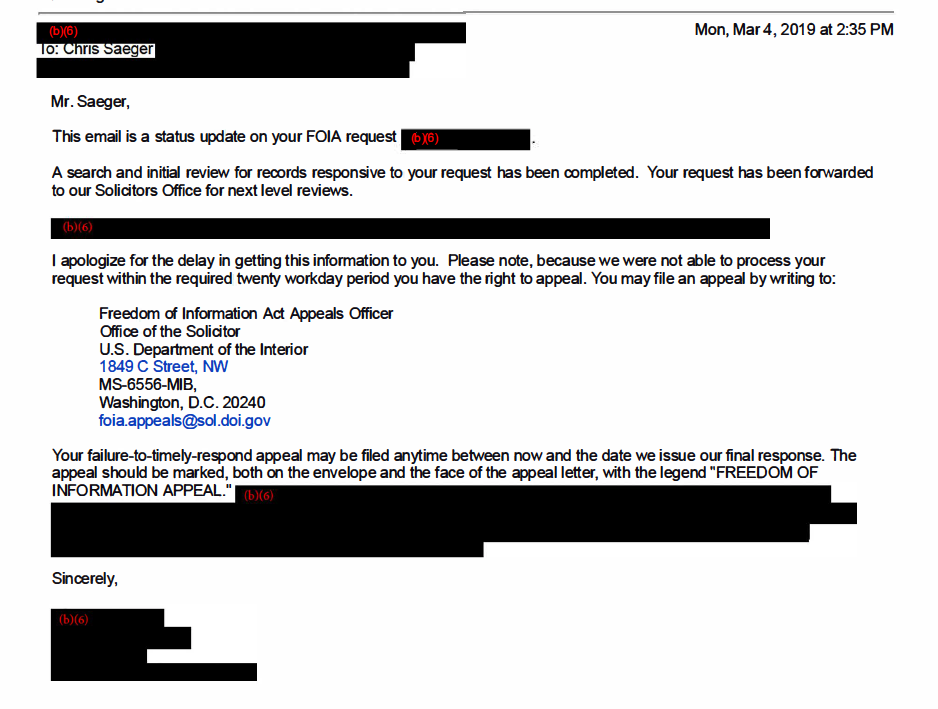 The review would likely be carried out by Jorjani, who is currently the Principal Deputy Solicitor of the Interior Department but has been exercising the authority of Acting Solicitor since May of 2017. Trump recently announced his intent to nominate Jorjani to be the department’s solicitor.

According to the Associated Press report, the bipartisan groups of Senators rebuked the rule stating that “The proposed rule appears to restrict public access to DOI’s records and delay the processing of FOIA requests in violation of the letter and spirit of FOIA. Rather than clarifying DOI’s FOIA process, the proposed rule would make the process more confusing and potentially expose it to politicization and unnecessary litigation.”

Interior had already created a burdensome review process last year in which all Presidentially Appointed, Senate Confirmed, Non-Career Senior Executive and/or Schedule C employees would be notified of pending public records releases. It is unclear in the directive if political appointees are allowed to make suggestions for redactions or request that information be withheld.